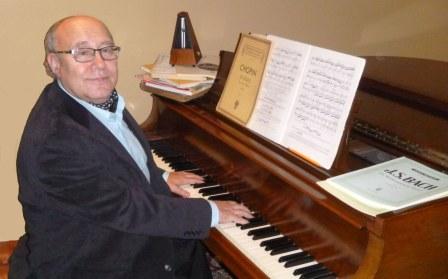 Zinovy Weinstein was born and raised in Orel, the center of Russia. He first exhibited musical talent at age six.
Mr. Weinstein studied with Alexander Franck and Leonid Brumberg, two outstanding piano teachers in the history of the Russian Piano School. From them, Mr. Weinstein gained a deep appreciation of musical style, technical mastery, including tone production and pedaling, and an impeccable sense of professionalism. He holds a Bachelor and a Master’s degree in Piano Performance, graduating magna cum laude from Ufa State Institute of Arts in 1973.
Mr. Weinstein’s desire to experience a wider variety of other aspects of the performing arts, led him to the Leningrad State Institute of Theatre, Music and Cinema (now The Saint-Petersburg State Theatre Arts Academy), where he graduated in 1988 with distinction.
In Russia, Mr. Weinstein enjoyed a respected and diverse musical career. He successfully combined his activity as a solo pianist and accompanist with an extensive teaching practice, which has now spanned more than forty years.
Among his pupils in Russia was a young Yakov Kasman, a future winner of many International Piano Competitions, including the Silver Medal at the 10th International Van Cliburn Piano Competition.
Mr. Weinstein immigrated to the United States in 1996 and was granted American citizenship in 2003.
Mr. Weinstein specializes in teaching musically mature students, both professionals and amateurs. In addition to offering lessons on a weekly basis, he has also prepared students for auditions at music conservatories, universities and professional schools. Utilizing his outstanding knowledge of repertoire and style, he has assisted pianists in preparing recital material, coaching them in matters of interpretation as well as addressing and mastering technical problems. Mr. Weinstein has also been a member of the classical piano faculty at the Brooklyn Conservatory of Music for more than fourteen years.